Since 1948…wow. That’s some serious stability. It also makes Nino’s just five years younger than the world-famous Pizzeria Uno. While Uno has a thriving tourist business (not to mention a fantastic pizza) that ensures its profitability, Nino’s location far from the Loop attests to its reliance on long-term quality and consistency, as well as local customer loyalty.

Ernie and I didn’t grow up on the South Side eating the pizza at Nino’s, so traveling there was just as exciting for us as an out-of-towner’s first trip to Uno. It was quite a long trip for a Friday night to get to Alsip, too, but it was well worth it. 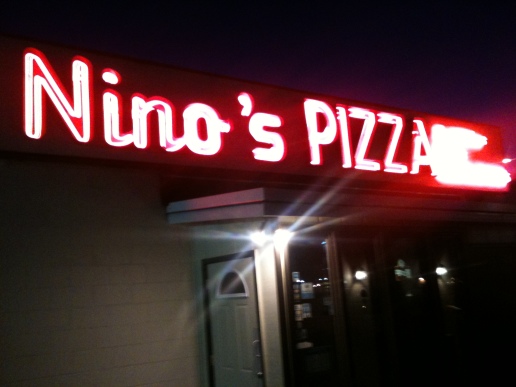 Located south of Chicago on 111th Street at Cicero Avenue, Nino’s is a place where families and friends can enjoy a comfortable, relaxed dining experience. Architecturally, the building has a bit of Tudor Revival going on, and on the inside, it’s a classic pizza joint: dim lighting coming from a few lamps and neon signs; exposed brick and wood-paneled walls; cozy wooden booths; red and white checkered table clothes; old photos; beer signs…a perfect place to enjoy pizza.

But since the Hound isn’t allowed inside (that’s okay…we know the rules!), he and I got called in a carryout order and headed back to the house in Logan Square to enjoy the prize. We got the 16-inch family size thin crust pizza. A party size pizza, measuring 18 inches in diameter, is available, too. Still, Nino’s has an even bigger pizza: the Wagon Wheel! Coming in at an unbelievable 29 inches, the Wagon Wheel is perfect for a party…or a good candidate to replace weekly groceries for pizza lovers like us!

Now, to our pizza. Toppings and cheese were standard and solid, but the crust set the pizza apart from other pizzas we’ve eaten in Chicago. Made with good dough, the crust on our pizza was thin and a bit soft, which contrasts with a place such as Vito & Nick’s which has (excellent) thin and crispy crust. This difference helped make Nino’s a taste for us to remember. Check out that cool drawing of the pizza king!

Price-wise, Nino’s comes out on the higher end of all the pizza places we visited. Our one-and-a-half topping 16-inch pizza came out to over $27 after tax, which is a few dollars over  our average.

Nino’s also offers deep dish, stuffed, and pan pizzas. It’s nice to have all those options. While we’ve never had any of those varieties from Nino’s, the fact that they clearly distinguish between “deep dish” and “pan” shows that they know what they are doing when it comes to Chicago pizza styles. The Hound and I have found that it is fairly common to for pizza places to use those terms interchangeably, which means you don’t know what you’re going to get and there’s a good chance that it’s not as good as their thin crust. Nino’s knows the difference. And, as the menu shows, sausage is encouraged, likely because, well, sausage is super popular as a pizza topping in the Chicago area. 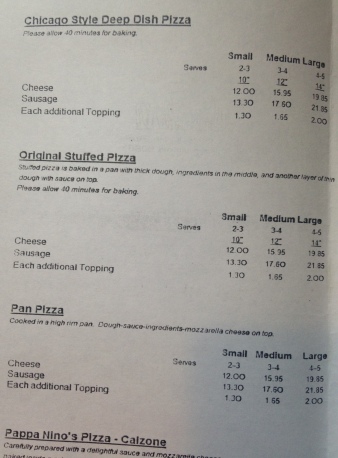 Coupons came with our order. Newer coupons can be found on their official website. We got free pop, too!

Is this the original location of Nino’s? Previously a small town of a few thousand people, the town of Alsip experienced its largest population growth in the 1960s and 1970s after the Tri-State Tollway, located to the south and west, was constructed. Did this pizzeria actually open there in 1948 when just about 1,000 people lived in the community (as opposed to nearly 20,000 today)? Or did it move from somewhere else, possibly following it’s customer base in the 1960s. It would be interesting to know the answer to that question. I’m sure someone out there knows. In the 1940s, it was probably unlikely that anybody in this area was making the relatively long trip to Pizzeria Uno on a regular basis, so Nino’s would have been a welcome pizza outpost.

Nino’s Pizzeria claims to be “Your Pizza King Since 1948.” For some residents in the Southwest Suburbs, it can at least profess a claim to the throne, though it has serious competition. Overall, it was standard, though not necessarily exceptional. However, we would have absolutely zero problem paying tribute to this king on weekly basis if we lived nearby. Long live Nino’s!