Danny’s Pizza on Chicago’s Southwest Side was another stop in which the Hound stayed home. Of course he had to point us where to go, but we also made some stops of our own along the way.

My great friend Matt was in town from St. Louis for the night. I wasn’t much feeling like hitting the bars and restaurants in the Logan Square and West Town areas, and instead wanted to get away for a bit. Matt’s has been a great traveling partner of mine for years, and we always seek different places to experience, so he had no problem taking a drive around the city for the evening.

Being March, it was a fairly cold day, as winter Chicago isn’t really over until June 1. First, we headed down to the Southeast Side via Lake Shore Drive and South Shore Drive. We drove through the huge vacant site of US Steel in South Chicago and, as the Chicago Skyway loomed above, we passed the houses and former industrial sites of the East Side and South Deering  We grabbed a burger at Phil’s Kastle on 95th Street at Avenue M, a great little joint with booths and a sandwich counter around the corner from the fabulous Skyway Dog House and about a block away from the sadly now-closed Mexican Inn. 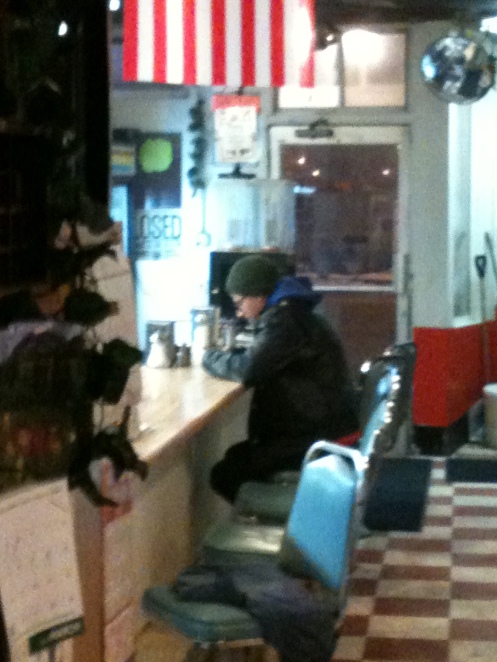 Still hungry, we headed west on 95th and had a small feast of smoked whitefish and trout at Calumet Fisheries. The sun was going down, and despite the fact that we already had a few things to eat, we inched our way northwest across the city looking for pizza.

Of course, we drove by the old stockyard gates on our way to short stop for a tasty craft beer a Maria’s Community Bar in Bridgeport. Is there any better bar in the entire world than Maria’s? There very well may be, but I’m not sure I know of it. After that, we grabbed a Coca-Cola to-go at a nearby corner store, and kept the trip across the South Side moving. We then found the dependable Chicago Pizza Highway, also known as Archer Avenue, and sought out…well…pizza.

We had a lot of choices, as it’s pretty easy to find a pizza along this thoroughfare as it moves diagonally through Bridgeport, McKinley Park, Brighton Park, Archer Heights, and Garfield Ridge out toward Midway. Danny’s stood out, though, if only for THAT SIGN! Classic and perfect. 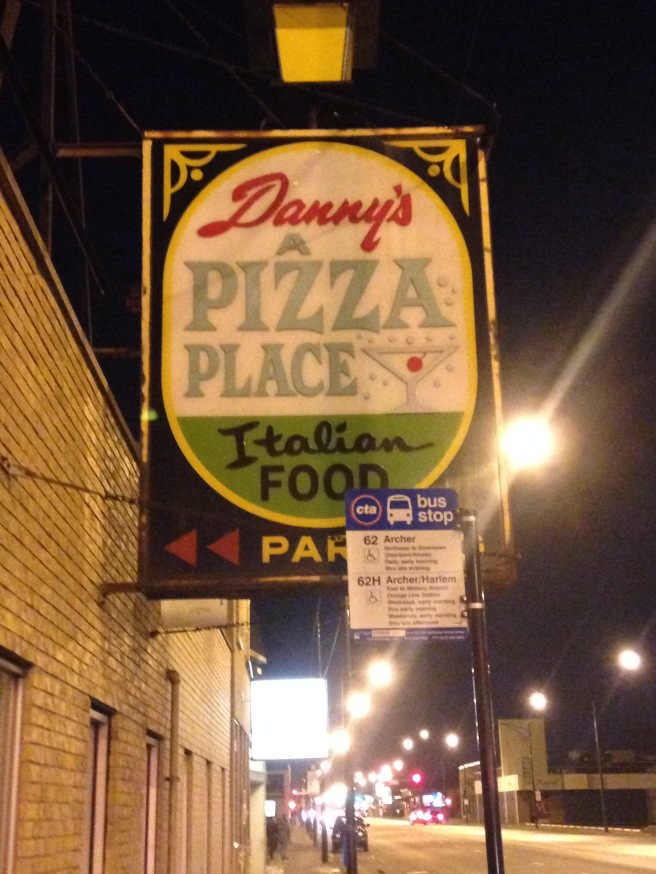 We parked in the lot on back, then headed through the wood-paneled delivery area–likely unchanged since the Danny’s opened–to reach the restaurant’s dining room. It was quiet for a Saturday night, with just a handful of regulars at the bar and a couple seated at one of the red and white checkered tablecloth covered tables. The local news played on the TV. We sat at the bar and ordered two Miller Lites.

A few minutes after ordering, our big pizza arrived. It was extremely hot, with a nice, somewhat thick layer of mozzarella. The amount of sauce was light, but the good crust. It was a great pizza, one that was surely best when enjoyed fresh out of the oven, and it was a perfect ending point for our tour of the city.

Unfortunately, it appears that Danny’s has closed since we visited a little over a year and half ago. This is sad, as it certainly contributed to the neighborhood as part of Pizza Row. I think I read something about it being taken over by another pizza place in the area, Villa Rosa, but we’re not sure this is the case.

Sadly, another classic pizza place has disappeared. Ernie must have known we needed to try it before it was gone for good.