This was the second time I had had Di Vita’s, a longtime eatery at Belmont near Milwaukee Ave. in Avondale area of Chicago. It’s been around a long time: since the 1950s. The Pizza Hound, however, wanted to try it for his first time, so for WrestleMania–the last one we watched at the Logan Square apartment–we got Di Vita’s.

Di Vita’s by some definitions located in the Logan Square community area of Chicago, but commonly it is referred to as being part of Avondale. People in Chicago sometimes tend to be rigid in the their neighborhood definitions, but like people in other cities, they are defined by different names and boundaries by different groups over time. The stretch of Milwaukee Avenue just to the south reflects that change through time. In just a few blocks, there several Polish-focused restaurants, bars, and stores, reflecting the thriving Polish community there for many decades. The Red Apple Buffet, Endy’s Delicatessen, Kurowski’s Sausage Shop, and the newer Staropolska Restaurant, just to name a few, can be found there. There are some businesses with Spanish names on Milwaukee and Belmont, as well, reflecting the large numbers of people from Latin America that have in the recent decades have transformed and revitalized Avondale, Logan Square, and many parts of Chicago. It’s a very interesting stretch of road worth exploring.

The area is full of classic Chicago two- and three-flat buildings. Some have brick facades, but many are clad with siding in muted colors. The crawl of gentrification has been affecting the area recently, pushing northwest along the Blue Line tracks, and rents and homes prices have increased. Trendy bars are popping up not too far away, and there are already some chains such as Giordano’s not too far away.

Di Vita’s has defied those changes, serving Italian food for six decades. Since Ernie and I had to watch to drama and action of professional wrestling’s biggest annual event, his mom went to pick it up for us. 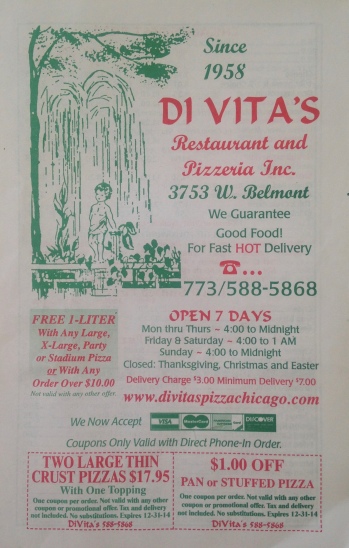 The Di Vita’s website says the business has been around since 1953, but the menu says 1958. If it’s not a typo, this confusion of dates could be due to the different families that owned the business and the different locations for the business over the years. According the business website, the Di Vita family purchased a pizzeria at Fullerton and Kedzie avenues from a husband and wife team headed for divorce. The new owners renamed the business after the Di Vita family name, and in the late 1970s moved to the current location at Belmont and Hamlin. Early in the 1980s, the Di Vita’s sold the Pecarros family. The business was sold within that family sometime in the 1980s, and is still run by the Pecarros family to this day.

For this WrestleMania, Ernie–wh0 has long been a John Cena fan–was really excited about Daniel Bryan taking on the Authority. So, I made him a small Daniel Bryan t-shirt collar to go with his Cena shirt, then we watched and listened to Bryan win two matches to become the champion at Wrestlemania 30. Woof! Woof! Woof! 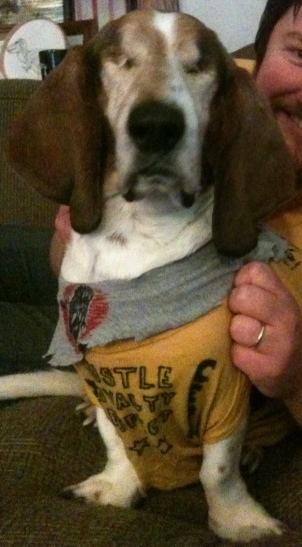 Halfway through the show, though, Ernie fell asleep and could not be bothered…

Not even by the spectacle of WrestleMania.

The arrival pizza perked him up, though!

Di Vita’s makes a standard Chicago-style thin crust pie. They apparently make their own dough, which is always a plus. Ernie loved the crust leftovers…frontward… 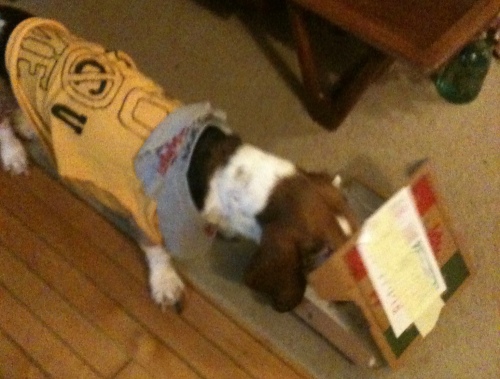 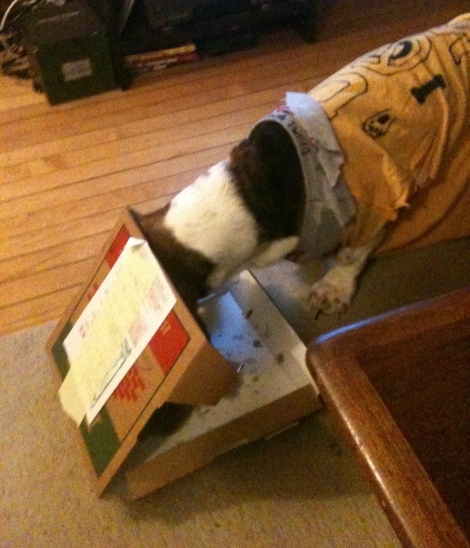 The Near Northwest Side of Chicago does not have nearly enough old fashioned local pizza joints, which makes supporting Di Vita’s a worthwhile choice for your pizza needs. For years living around Logan Square, Wicker Park, Bucktown, and Ukrainian Village, we always wished there more choices. Sure, there were classics like John’s on Western and Father & Son on Milwaukee–and farther to the Northwest there are many choices like La Villa–but there had surely been other businesses that had vanished in the passage of time. Gentrification has brought newer, more contemporary pizza options to those areas such as Piece, Santullo’s, Boiler Room, Dante’s, and Coal Fire (mmmm…) that focus on New York and New Haven styles of pizza, not to mention a few local and national chains. But classic thin crust tavern-cut pizza is a key piece of local culture, so enjoying pizza from places like Di Vita’s is well worth occasionally bypassing those newer options to get a real taste of Chicago.

It’s also a great choice when you are hanging out at home watching and listening to the underdog beat the bad guys in the biggest event of the year. Yes! Yes! Yes! Woof! Woof! Woof!