The Pizza Hound and I really miss Chicago-style thin crust pizza. Though there are definitely similar pizzas across the country, and particularly in the Midwest and Great Lakes region, it really isn’t everywhere in the country. It’s everywhere in Chicago, though, and all kinds of places make a great pie. Sometimes nothing sounds better than a basic cheesy thin pizza cut in squares from an old pizzeria.

Geneo’s (or is it Pizza By Geneo’s?) definitely fits the bill. It is standard Chicago-style thin crust pizza. No flash, but definitely good. Ernie and I swung by Geneo’s on a Sunday afternoon, rather than our typical Friday or Saturday night hunt. Geneo’s is located on 59th street on the south side, between Sacramento and Richmond Streets. It’s take-out and delivery only, and the inside is fairly unimpressive (however, a fancy interior is not at all a requirement for a great pizza), with a counter to order, a menu on the wall, and a seat to wait.

The take-out menu notes that all pizzas have a cheese base (in this case, pointing out that they use real cheese), which to me is one of the intriguing quirks of Chicago pizza menus. Not the cheese itself, but this and other menus’ upfront discussions of cheese. As one would expect, many restaurants don’t mention the cheese at all on their menus, but some will  go the slightly different route than Geneo’s and explicitly outline “cheese and sausage” or “cheese and mushrooms” for whatever price. And some will have a very long list of these simple combinations, each usually with exactly the same price no matter what topping is listed. Why does each one need to be listed in that way? The person taking the order will even say, “So, that’s a extra large with cheese, pepperoni, and sausage.” Uncommon preferences aside, don’t pizzas almost always have cheese? Why does it need to be mentioned? A fun little idiosyncrasy.

Now to the pizza itself. We kept it standard, with all pepperoni and half sausage, and we liked Geneo’s. It’s Chicago-style thin crust typical of the South Side, cut in squares, just like we wanted. Overall, it did not blow us away, but you certainly couldn’t do wrong by ordering it if you happen to be in the neighborhood. Geneo’s has apparently been around for a few decades, which is great. It also has a beautiful neon sign, of which I sadly have no photos. But I did get a photo of the Hound eagerly awaiting his prize! 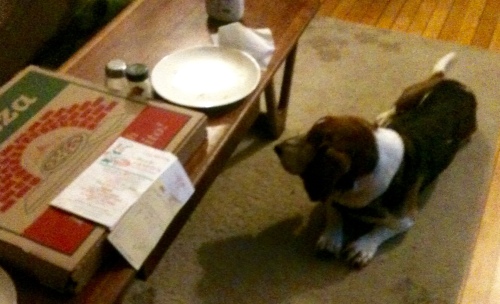 Also, I love these pizza menu designs. Who creates these? I feel like I have seen this same pizza man on another menu, but I may be wrong, because it’s on the Geneo’s sign, too. Either way, they are a great, fun element of pizza pop culture.

Is this really the Geneo’s website? Check out the bizarrely vague video!